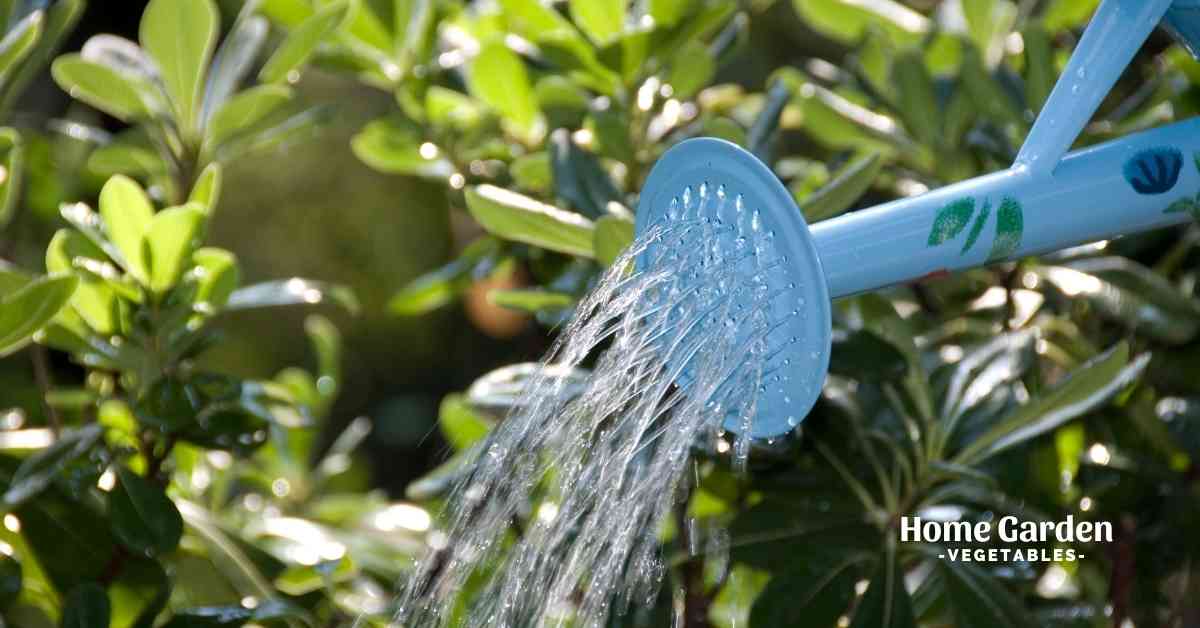 Most city dwellers rely on tap water when rain is sparse. Have you been wondering if tap water is good for vegetables, or should you switch to a different water source? If your plants aren’t looking their best despite their optimal watering and feeding routine that you’ve maintained through the seasons, the problem could be in the water. Though most of us water vegetables with tap water, it’s not the best for plants.

There are several undesirable effects that tap water can have on vegetables. However, thankfully, there are also ways to reduce the negative effects of tap water and make sure that the plants don’t suffer. Continue reading and you’ll find out all about irrigating with tap water.

Is Tap Water Bad For Vegetables?

It’s well known that municipality tap water has chlorine and fluoride added to it. So if you’re getting water from the public sanitation system, it’s likely that these elements will be present in it. While chlorine and fluoride are effective in removing harmful pathogens from water and ensuring human health, it’s not as good for the plants.

Chlorine in tap water is meant to kill microbes in the water, making it safe for human consumption. Naturally, when given to the soil, it has the same effects. It kills microorganisms in the soil, disturbing the soil’s ecosystem and diminishing its capacity to break down organic matter to release nutrients.

Other than depleting the microbes in the soil, chlorine can also cause toxicity in plants, especially if present in excess. At the recommended levels, chlorine is an important nutrient to the plants. However, if offered in excess, it can cause toxicity, similar to all other nutrients.

Apart from chlorine, fluoride isn’t a good addition to the soil either.

Since chlorine doesn’t retain it’s pathogen killing properties for long, many municipalities have switched to the addition of chloramine in water. Chloramine treatment of water involves the addition of both chlorine and ammonia to water. Chloramine can also be toxic to plants if added in excess. CDC recommends 4ppm as the maximum concentration of chloramine in water and most municipalities comply with these figures. At this level, chloramine is unlikely to cause any significant damage to crops.

How To Avoid Using Tap Water

If you’re worried that the chemicals in your tap water might harm your vegetables, the best way out is to avoid using it as much as possible. The cheapest and the most straightforward solution is to keep several buckets around the house to collect rainwater. Store the water that you collect and use it every time you want to irrigate the crops. Furthermore, if you can afford bigger investments, install one or two rain barrels around the house. Rain barrels will make it easier to collect and store water until you want to use it in the garden.

Another way to skip chlorinated tap water is to have a well dug in your yard. Water from the well is ideal for watering vegetables and can also be used for several other water-intensive jobs, such as washing cars.

How To Remove Chlorine From Tap Water

If present in small concentrations, chlorine isn’t toxic to plants, though it may be damaging to the microbes existing within the soil layers. However, you may want to keep your gardening completely chemical-free to enjoy fresh, healthy and organic vegetables. If you have a chemical-free vegetable garden in mind, there are ways that can help get rid of chlorine from water and make it healthier for irrigation.

The simplest solution to getting rid of chlorine and fluoride from tap water is to let it sit overnight before watering the plants with it. If water is allowed to sit for at least a day before giving it to the plants, these unwanted chemicals will evaporate from it. Don’t cover the buckets since it inhibits the evaporation of chemicals. You can water with it the next day with the confidence that you’re not adding any chloride or fluoride to the soil.

Don’t let the water sit for too long before giving it to the plants since it will soon start breeding mosquitoes and you’ll have a new problem at your hands to sort out!

Though letting tap water sit for a day is effective in getting rid of chlorine, chloramine doesn’t go away so easily. If you’re sure that the water you’re getting in your house taps has chloramine in it, boiling the water, letting it cool down and then watering with it is a good idea to save the crops from excessive chemicals. Research shows that boiling water for 30 minutes can remove half of chloramine from it. In contrast, it only takes 2 minutes of boiling to remove half of the chlorine.

Do make sure that you let the water cool down to room temperature before watering the plants with it so they won’t burn!

Now that you know all about watering your vegetables with tap water, make sure your vegetables are getting the healthiest resources to thrive. Rain water is the best water for your plants, no doubt about that. That being said, contrary to the belief that’s circulating the internet that tap water is dangerous for plants, it’s not that big of a problem provided the WHO and CDC recommended levels of chlorine, chloramine, and fluoride are maintained. Furthermore, you can follow the tips above to eliminate the unwanted substances before watering your crops.